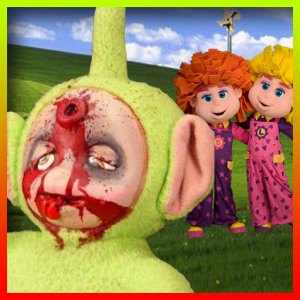 Damn. It looks like they’ve finally ditched Teletubbies for a new show called “Shiera and Loli’s Dittydoodle Workshop”. I hope this show continues, it looks like fodder for some good snarkiness here. For one thing, they have a character called Icky Icky Cock.

Besides one of the main character’s abbreviated Lolita name (Loli) and a creepy old icky icky cock professor, the other main character is a fashion victim woman that does all the booty shakin’ on the show. Her name is Miss Molly, but she doesn’t look like a “Molly” to me. I’ll come up with a better name for her in time I’m sure. I hate people that encourage kids to stress themselves to the point of exhaustion because they think “it’s AWESOME!”

Well, the show went on and I’m not sure what really happened. Sheira and Loli got into an argument over whether to paint the room with hearts or stars. It’s like people from Daily Kos trying to decide whether to paint a room red or blue. Nobody got banned from the show so I assume everything went well in the end.

Barney and the gang are talking about going to the zoo. Not sure yet if they really ARE going – these things never work out on Barney. They usually just hang out in the caboose and pretend they went. Sure enough, some kid says her mom won’t let her go – ruining it for EVERYBODY!

Griff has a scheme to bring the zoo to Baby Bop. But he knows nothing about animals – just music. So his plan is to make a “Musical Zoo of the MIND”. But wait – now they’re talking about how it’s cold outside. I think their ritalin-induced short attention span has put the zoo of the mind idea on the back burner, for now anyways.

It’s a Fall day on Big Comfy Couch. Major Deadhead shows up at Granny’s in a winter snorkel jacket and snowshoes to prove that he doesn’t get the concept of seasonal changes. I shouldn’t make fun of the guy – after all, he’s got a job and all I’ve got is this snarky blog. I can make fun of Auntie Macassar though – she’s a deadbeat. And one monster of a coolot munching camel-toe! Today she plays dress-up with different shoes, and we get an extended view of her gams. Some shapely ham-hocks there for a big girl.

This entry was posted on Tuesday, September 2nd, 2008 at 11:31 pm and is filed under Uncategorized. You can follow any responses to this entry through the RSS 2.0 feed. You can leave a response, or trackback from your own site.