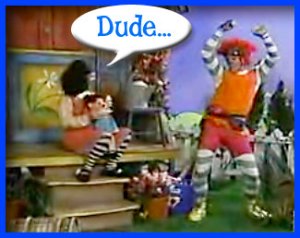 Teletubbies have a “dancing day”. We were under the impression that every day was dancing day in teletubbyland. Guess not. This day is more “dancy” than others. The live segment features a middle-eastern girl “dancing” a traditional dance. It’s not so much a dance as it’s a “make a vogue pose every time mom hits the bell” kind of pavlovian response. Arcturo and I both know what dancing is – it’s more along the lines of freeform “provocative squats” (as Frank Zappa put it), than acting like a puppet.

On Barney, B.J. gets his hands on some paint and marks the whole front of the clubhouse. He figures out it was a big mistake when the others arrive and bitch about it. This is to be expected. One day I needed to paint my living room, and invited a bunch of friends saying “I’ll buy the booze, it’ll be fun! Like a party!” Yeah, that didn’t go so well. I spent the next few months trying to clean up the mess. Same thing happens when you hand a wet paintbrush to a retarded lizard that doesn’t know the difference between a square and a circle.

B.J. is happy that they all forgive him after cleaning up his mess. He feared they’d ostracize him, or maybe beat him with planks and rocks, so it all worked out well for him – this time.

The “gang” goes off on a camping trip for 7 days leaving Barney and Baby Bop behind. They miss the gang terribly, what can they do? Write them a letter! Yeah, that’ll work. I’m sure they took a mailbox camping with them. Besides writing a letter to their campsite, Baby Bop calls them on the phone. I’m guessing they’re not camping in the woods, but probably holed-up in some Holiday Inn waiting for a drug deal to go through.

Barney has to remind Baby Bop about some fun times she’s had with the “gang” – in case she’s so mentally deficient that she suffers amnesia after a few hours of not seeing someone.

I must have blinked or something – the gang is suddenly back again. Big celebration with air-filled balloons on the end of sticks to make them look like helium-filled ones. We don’t get why they didn’t use real helium filled ones and opted for faking it with air filled ones instead. Probably a safety issue – oh the humanity!

Loonette tells lies. This leads to one of the finest examples of modern dance to ever grace the world’s dance stages. Major Deadhead does the “Pants on Fire” dance. You can do it too! Grab a pair of ball-clenching tights, your most colorful leg-warmers, and JOIN THE FUN!

This entry was posted on Friday, July 25th, 2008 at 11:25 pm and is filed under Uncategorized. You can follow any responses to this entry through the RSS 2.0 feed. You can leave a response, or trackback from your own site.