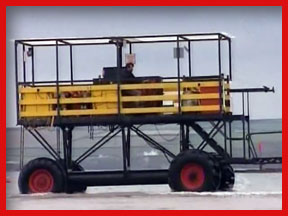 On Teletubbies today, Nu-nu snarfs up Twinkie’s tubby-toast. Twinky will probably starve if he doesn’t get it back. He chases Nu-nu around to get his supper, but nu-nu turns the tables on him and runs him down in cold blood. Leaves him squirming in the gutter like a roadkill.

The little “real life” interlude includes a ride across a deep, murky channel on top of this insanely dangerous looking contraption (see pic). Apparently, the community is trying to save funds on a water taxi so they had some Canadian duct tape this thing together using parts from discarded construction scaffolding and submerged tractors. I’ll be watching YouTube for vids of this gizmo flipping over and plunging everybody’s heads into the mud below.

I have a question about Barney – why do all the kids voices sound like they’ve been smoking 4 packs of Pall Malls every day for the past 60 years? This one kid today sounded like Homer Simpson’s sister-in-laws. We were waiting for him to say something out-of-character, like “You call this a martini? Get me a goddamn olive before I piss on your Legos.”

Song: “Let’s take care of our pets, our fishes and frogs and our cats and our dogs…” No word on birds in this song upsets Arcturo. He’s all like “Screw this shiat” but watches anyway because it’s colorful and there’s a puppy dog in this episode.

Arcturo looks at me like “WTF are they talking about? OF COURSE birds can talk, jeeze!” I explain that these kids were just hatched, and they haven’t met many talking birds yet. He still thinks they’re a bunch of idiots.

Griff sings about his wounds, gunshot in the knee, blunt weapon trauma of the head, scars on the upper arm that look suspiciously like blown out old heroin tracks. This is their way to segue into playing doctor. What happened to taking care of pets? Nevermind that – the producers of Barney want to play doctor again. They do this a lot. Buncha sickos running this show.

Big Comfy Couch was cool. All about Copycats, and no sudden ADD-induced segues into off topic subjects (like playing gynecologist with midgets in dinosaur costumes. I’m looking at YOU Barney).

Major Deadhead tools up on a smokin’ ’78 Harley Low-Rider Shovelhead dressed like Elvis (Glitter-costume era Elvis, not the peanut butter bacon sammich Elvis). “Camel-Toe-in-a-Coolot” (Auntie Macassar) sings something about monkeys going down on her.

This entry was posted on Tuesday, July 22nd, 2008 at 12:17 am and is filed under Uncategorized. You can follow any responses to this entry through the RSS 2.0 feed. You can leave a response, or trackback from your own site.