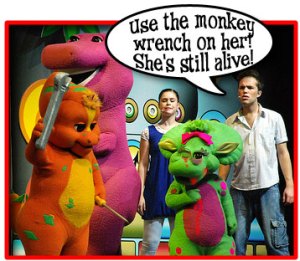 Teletubbies found a magic drum that causes all sorts of things to change places – clouds, flowers, even other Teletubbies. This is another episode with the dancing bear on a carousel segment. I think they like this one because it shows off some 3-D reflection techniques in the mirrors. I’m glad to see Arcturo’s interest in this, because 3-D Artist is probably one of the careers a bird can do these days. It doesn’t require any heavy lifting.

On Barney, Griff admits to hearing sounds in his head, sings “Can you hear it? I hear music in my head!” – probably just a side effect of his medications. I can tell Griff is up to no good, they are constantly finding him doing suspicious things. Today he claims he was hiding behind the tree to scare everybody. We think he was back there counting all the loot he’s stolen so far. If I were Barney, I’d pull a prison style lock-down search on that tree of Griff’s.

Baby Bop goes into a pity trip claiming everybody hates her. This is true. Arcturo and I can list the many reasons why everybody hates her; she’s nosey, whiney, always underfoot, dumb as a box of rocks, and if she doesn’t do something about that irritating voice, we’re going to duct tape her upside-down from the rafters and throw darts at her. If they’d just be honest to her, she won’t have to face a life of disillusion. All the lies they say to her, to protect her delicate feelings, will just lead her to grow up to be a sad trailer park fatty sucking down bon-bons and calling her friends in the middle of the night to fish for compliments every time the valiums take hold. “Yes Lady Bop, it’s not how you look, it’s the feelings you have inside that make you beautiful. Can I hang up the phone now?”

She does a few completely retarded squiggles with black ink on some newsprint paper in a pathetic attempt to create “art”. She claims the three paintings are of an elephant, a house, and a mountain – of course it’s just mud, but everybody tries to humor her until it’s painfully obvious that they can’t tell which one is a mountain and which is the elephant – turns out neither can Baby Bop, so this is just another of her lame attempts to get some attention from everybody.

Having failed to extract the necessary amount of pity from her friends, she produces another painting – this one is a beautifully rendered depiction of Barney dancing with hearts floating behind him. Two seconds ago, she was pretending to be too retarded to bounce a ball, and all of a sudden we’re supposed to believe she can paint like a professional Hallmark greeting card artist.

Arcturo hates liars – especially when they lie about art, he feels very strongly about this. I don’t blame him. Artist is one of the few careers a bird can aspire to, it’s hard work and he’s not about to let some lying poser claim to be an artist. Being a fat retarded lying freak-ass dinosaur is another thing Baby Bop can add to her “Why do people hate me” list. I suggest all her friends get together and push her in front of a bus one morning and we can all claim that we told her playing in the middle of the street was dangerous, but she was too stupid to listen to us. See what she gets?

Oh – for some insane reason they also had a “Mexican Band” play while some kids were forced to dance some embarrassing tarantella dance which, until this day, has only been performed by adults. That probably has to do with the fact that the dance involves a lot of crotch yanking by the men and skirt lifting by the ladies. But this doesn’t stop the dance coordinators hired by BarneyCo from making the kids perform these routines. And the “Mexican” guy playing guitar is about as Mexican as Pillsbury’s puffy white doughboy. In fact, I think that’s him. Poke him in the gut and see if he giggles.

It’s camp out day on Big Comfy Couch. Everybody gets together at Granny Garbonzo’s. It’s a sleep over, and Uncle Wobbly isn’t invited. Too bad – that could have gotten interesting. Granny Garbonzo cooked up another culinary clown creation; Zucchini Weenie Beany Pizza!

Glad to see they don’t only eat Beets. And that they have pizza! Depending upon what kind of beans they used, I might even enjoy a piece of this one. Arcturo likes Zucchini.

This entry was posted on Thursday, July 17th, 2008 at 12:40 am and is filed under Uncategorized. You can follow any responses to this entry through the RSS 2.0 feed. You can leave a response, or trackback from your own site.